Are you looking to have a back-up plan to do some indoor or outdoor grilling with an electric grill? You might not imagine there are many brands out there that do a good job, but we've found three that hold up very well. But don't take our word for it, read the reviews on Amazon to see what the real critics are saying.

Electric grills haven't been around for very long in our history. It was only from the early 1980s that Bill Best invented the very first infrared grill which heated a ceramic tile that was marketed to restaurants. It took nearly 14 years later that George Foreman introduced the Lean Mean Fat-Reducing Grilling Machine. It could be said that this product meant for the household sparked the electric grill craze.

Ever since then, the technology for electric grills has grown into an item that nearly everyone happens to own. Well, those of us who are puritans of BBQ will know there is no substitute for real grilling. The natural smokiness and flavors you get from coal and natural wood is an experience that is as close to the rapture that we can hope for. However, there are some aspects of electric grills that are getting dangerously close to the borderline. 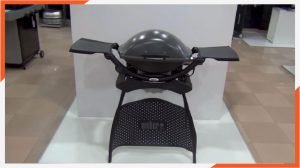 The Weber electric grill can be plugged into any 120V outlet and is perfect for outdoor grilling when you don't have a charcoal or gas grill. It's compact enough to place on a tabletop and can also attach to separate leg supports that you buy as an additional purchase. It's also very simple to use making it a no-brainer for those who want to have grilled food. It's also large enough of a grill that all sorts of meat and vegetables can be cooked.

The grill itself is a cast aluminum body that has a heating element underneath two removable grill grates. These grates are specially coated with a ceramic coating, so it makes clean up a bit easier in the kitchen sink. There's a temperature controller that can reach 540 degrees Fahrenheit in good conditions. It has an easy lift lid that covers the grill so cooking can happen faster, just like with a regular grill.

There is also an additional add-on that allows you to connect a smoker to this grill, so you can induce real smoke into your meat! Who else but Weber to make this innovation that makes electric grilling a little bit better than expected!

It's a neat little grill for those who like to cook at tailgate parties, while camping in an RV, or living in a condo. Aside from plugging this in, let it warm-up and then start cooking. The grill itself can cook a lot of meat to feed your family or friends. Since it has 280 square inches of cooking space, this can hold a dozen burgers and more than half a dozen chicken breasts. If you like sear marks on your meat, the raised grill grates do a fine job at sealing in juices.

It needs a circuit that needs at least 20 amps so it can work without blowing your fuse. This applies to RVs and vehicles equipped with a 120V power supply. It can reach a maximum of 500 degrees plus if the ambient temperature is ideal, but does take 20 minutes to reach this. There is very little to assemble and it does have a lower heat liner that slides out for cleaning grease or oil.

The body itself can be cleaned with a sponge and you don't need to take out the heating element. The annoying part is needed a table to put it on if you don't buy the extension legs at an additional price. If the weather is cold, I don't think it's possible to reach 500 degrees so easily, but on hot days it will be possible. The add-on smoker is a nice touch from Weber, but the price they're asking is a bit steep for the average backyard grill fan. 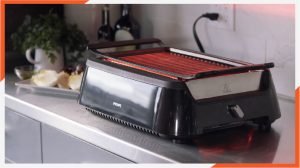 If you're looking for a grill that can be used indoors and is virtually smokeless, this nifty grill setup is a good choice. It's not rocket science to imagine this grill can fit on a countertop and make decent grill dishes that are as close to grilling without the smoke. It also has a few interesting points that make indoor grilling a lot easier to manage. Let's explore what the Philips HD6371 can actually do.

The first thing that you'll find is that this is a grill cooking top that doesn't have a cover. You plug it into any 110V outlet and let it get warmed up. It comes with a single removable grill cover that cleans up very easily. There is also a removable tray that catches all the liquids and grease that drips into the lower tray. It's very easy to assemble and takes only one minute to put everything together.

Because there is no temperature control, this grill uses infrared heating to cook your food. It warms up instantly to a maximum temperature worth 446 degrees Fahrenheit. Two heating elements are especially focused on the cooking grill so the entire grill surface will cook meat, fish, and all sorts of grill dishes. If you're a fan of Korean BBQ or Japanese Yakitori, you'll love this portable grill.

It's very good at warming up and grilling hotdogs but if you have any kind of marinated meats, these tend to get burnt onto the grill surface. It's easy to clean off the grill after that, but you'll need generous amounts of water to remove the caked-on sauces otherwise. You won't be able to cook thick meats on this grill simply because it will take longer to cook the center. It's better for thinly sliced meats that are 1- 2 inches thick.

The grill itself gives you a generous 112 square inches of cooking space which is enough for 3 or 4 steaks or half a dozen hamburgers. For small families and couples, this is more than enough to make a decent meal. It does sear the meat nicely although it just lacks the appeal of a conventional coal-fired grill. For most people who live in apartments and places where grilling isn't allowed, this will do in a pinch. 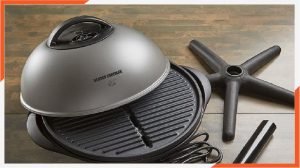 The name says it all with both the former heavyweight boxer George Foreman and the potential to serve up to 15 people at a time. One thing that does give this grill appeal is the indoor/outdoor properties that allow you to cook inside or outside. It also looks like a conventional grill except for the fact it's an electric model. While this might be the ultimate hotdog and hamburger grill for conservative families, let's see how well it does messier jobs.

Moreover, it resembles a cross between an old fashioned Weber grill mixed with an electric lawn mower esthetic. It has a dome covering that does come in handy for raising the temperature and there are air vents inside. The temperature control has 5 different settings that can reach over 200 degrees which is enough to cook steak and most meats. It also has a grill stand that makes it easy to set-up in the backyard and a removable grill cover.

This grill is large enough to cook up to 15 people and has over 232 square inches of cooking space on the grill surface itself. This is nearly enough to cook a dozen small hamburgers and 4 or 5 chicken breasts. Not exactly enough for 15 people, but darn-near-close enough. Like all of the George Foreman grills, it's great as a non-stick grill that does give nice sear marks. You can cook a large frozen pizza to perfection in addition to other BBQ related foods.

What makes this ideal is that it's virtually smokeless unless you burn something, so cooking with this grill in your kitchen is easy. The temperature controls are worthless if you want to do real grilling with hamburgers and steaks, so it needs to be cranked up to full blast. The cover is also good if you want to cook thicker meat or even a chicken, the cover does come in handy. I don't recommend cooking a turkey on this grill, but a whole chicken could work.

If you're reheating foods or warming up snacks, the adjustable temperature controls are helpful, unless you need to cook thicker meat. Since it doesn't work as a regular grill, you won't get the smokiness that many BBQ lovers like so much. It's good in a pinch if you want to have a grill top that the kids won't get hurt from using.